The consortium operating together as “StasHH” comprises 11 fuel cell module suppliers, 9 original equipment manufacturers and 5 research, test, engineering and/or knowledge institutes and will standardise physical dimensions, flow and digital interfaces, test protocols and safety requirements of the fuel cell modules that can be stacked and integrated in heavy duty applications like forklifts, buses, trucks, trains, ships, and construction equipment.

The consortium receives 7.5 M€ funding from the European Union, through the Fuel Cells and Hydrogen Joint Undertaking, The total budget is 15.2 M€.

The size nomenclature for batteries has been well established over time and became known as the “AA-series” nomenclature and has resulted in a rapid adoption of battery technologies into a wide variety of applications. A similar nomenclature, denoted as the “HH-series” is envisioned by the StasHH consortium for fuel cell modules, which are at the heart of any fuel cell system. Upon reaching an industrial consensus between fuel cell module suppliers and OEMs regarding the standard, the fuel cell module suppliers in the consortium will design and develop standardised modules for different power classes. The modules will be tested by the test centres in the consortium upon key indicators to benchmark performance and safety. Meanwhile the consortium will make a committed and devoted effort to promote the standard at the appropriate European and international regulation, codes and standards platforms to enable the worldwide adoption of the standard. Proper dissemination is guaranteed and exploitation efforts to external fuel cell module suppliers and OEMs is foreseen.

Bart Biebuyck, Executive Director, Fuel Cells and Hydrogen Joint Undertaking (FCH JU) said: “We are proud to support this strategically important project as a main step towards the decarbonisation of the transport sector. The project outcomes of StasHH will not only stimulate greater competition among fuel cell suppliers, but will also enrich the offer and make it easier to integrate fuel cells systems in heavy-duty powertrains. With its specific focus on the heavy-truck sector, this project will play an essential role in reaching the common target of 100.000 trucks by 2030 set in the joint coalition statement of industry representatives last December.”

Ruud Bouwman of VDL, member of the StasHH consortium adds: “Standard sized fuel cell modules are a prerequisite for adaptation and acceptance of the many different stakeholders in the various fields of application, therefore this project marks the start of a new era. Now we can finally show the potential of hydrogen and break through ‘old’ prejudices. We as VDL partner in this project and we are eager to use these modules in all kinds of applications throughout a range of applications of our Group companies.”

Adwin Martens , managing director WaterstofNet 'Standardisation of technology and components is crucial for the further deployment of hydrogen applications. As WaterstofNet, we are therefore pleased to be a partner in the European StasHH project, in which 25 leading organisations will develop standardised and universally applicable fuel cell modules. These modules will be cheaper and easier to integrate for a wide variety of applications. StasHH fits in seamlessly with the experiences we have gained with the demonstrations of a 27-ton rigid truck (H2Share) and a 44-ton truck-trailer (Waterstofregio 2.0), which shows that the technology works, but that standardisation is necessary to make it more interesting for the market.

In StasHH, WaterstofNet offers its knowledge and experiences in the field of hydrogen heavy duty demonstrations in the Benelux and is responsible for the development of exploitation trajectories and dissemination activities. 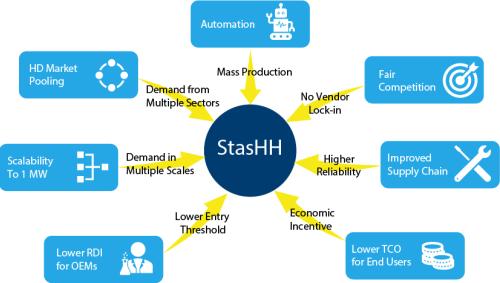 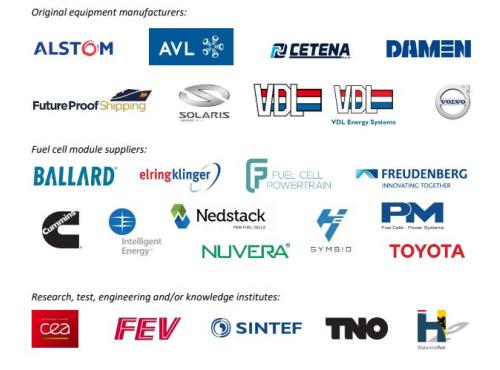