WaterstofNet and Hyundai Belux: Collaboration awarded with a Hyundai Nexo

As the governing body behind the Waterstof Industrie Cluster (Hydrogen Industry Cluster), WaterstofNet aims to play a pioneering role in the use of hydrogen as a fuel for zero-emission mobility. As part of their collaboration, Hyundai Belux offers a Nexo fuel cell car to WaterstofNet for one year.

As one of the few brands with a hydrogen-powered model, Hyundai Belux has been a member of the Waterstof Industrie Cluster for some time. In the past there were pilot projects with the Hyundai iX35 Fuel Cell, but today Hyundai and WaterstofNet are crowning their collaboration with the deployment of a new Hyundai Nexo, the brand's second generation fuel cell car.

Matthijs Keersmaekers, Head of Future Mobility at the Alcomotive group of which Hyundai Belux is part:“Given their immense network in the sector, WaterstofNet is the ideal partner for promoting Hyundai's investments in this technology on the Belgian market. Hyundai has been playing a pioneering role in the development and research of hydrogen applications for years and, in addition to electric cars, also wants to continue to actively focus on hydrogen as a green drive. The sales volumes of the Nexo will remain limited for the time being, mainly due to the limited refueling infrastructure in our country, but we are convinced that this will increase considerably in the coming years and that hydrogen will play its part in the further greening of the Belgian vehicle fleet.”

Deploying the Hyundai Nexo is also an important step for WaterstofNet, says its Managing Director Adwin Martens: “With the iX35, we have been able to successfully use Hyundai's first hydrogen car in recent years, but with this Nexo, the brand has made enormous progress in hydrogen technology. There is now a lot of movement around hydrogen in our country. It is obvious that Hyundai is especially looking forward to the opening of additional refuelling stations. It is precisely in that area that things are now accelerating, with the recent opening of the first multimodal station in Antwerp, and four additional stations that will open in the short term. The more dispersed hydrogen can be refueled, the faster people will become interested in fuel cell cars. And after one test drive with this type of car, you are immediately convinced of the user-friendliness of this technology. As WaterstofNet, we are actively committed to the further roll-out of hydrogen refueling infrastructure and vehicles in our country. With the use of the Nexo, we are putting our money where our mouth is.” 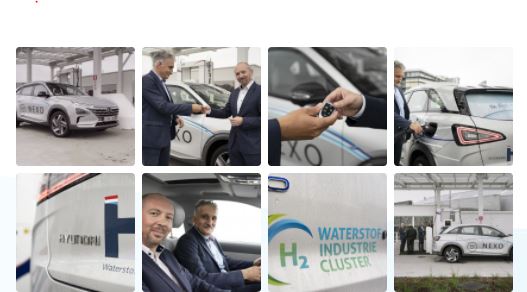