DATS 24, Colruyt Group's energy and fuel supplier, is opening its third H2 filling station at the Researchpark in Haasrode. With this opening DATS 24 emphasises its belief in hydrogen as a fuel for electric vehicles. After all, hydrogen fuel cell cars are also considered to be electric cars. The opening of this public hydrogen station was made possible thanks to support from the EU's H2Benelux programme. Besides industrial and logistics applications, hydrogen also has a role to play in the decarbonisation of transport and mobility.

The importance and potential of hydrogen as a sustainable energy carrier is growing rapidly. Both for industry and for transport and logistics applications. But also for passenger transport and mobility, as a complement to battery-electric driving. Raf Flebus, Business Unit Manager of DATS 24, emphasises that it is a positive story: "Hydrogen will play an essential role in industry, logistics processes and in transport activities. We also sincerely believe that electric driving will become the norm. For a majority of Belgians, this will eventually be feasible. But it is important to get as many people as possible on board for the transition to emission-free driving. And hydrogen will certainly have its place in this, alongside battery-electric driving. In a number of circumstances, hydrogen-electric can play off its complementary role with battery-electric. For example, when the electricity grid is congested or when charging is taking place in a higher-density urban context where apartment buildings are the main form of housing. This often prevents the installation of own charging infrastructure, today an important condition for the switch to battery-electric driving. And finally, hydrogen-electric driving is less dependent on certain rare materials. "

"This first hydrogen filling station in Leuven fits in with the pioneering role we want to play in making Leuven a climate-neutral city," adds Mayor Mohamed Ridouani. "It is a great example of how we as a city work together with companies and partners to realise concrete initiatives like this."

Hydrogen plays a crucial role in decarbonisation of the energy system
The aim of the energy transition is to replace the current energy source with a renewable one for all applications. To fully implement this decarbonisation, several technologies are needed in parallel, including technology that can provide sustainable molecules. After all, a significant part of our total energy consumption is not electric but consists of natural gas and petroleum products. The production of green hydrogen through electrolysis on the basis of green electricity is such a technology that reduces emissions to zero. Richard Ferrer, Head of the Alternative Fuels Sector at CINEA, the European Agency for Climate Infrastructure and the Environment, also makes the conscious link to decarbonisation of transport: “A green energy mix coupled with a reliable alternative fuels supply network for transport is key to contribute reaching Green Deal objectives and carbon neutrality in Europe by 2050. Today opening this hydrogen refuelling station in Haasrode, is not only beneficial at local, regional, and national level, it is instrumental in deploying a seamless and decarbonised European transport network.”

Hydrogen-powered electric vehicles offer unique advantages
"Sustainability remains the guiding principle in everything we do. Colruyt Group gives us the space to take up our pioneering role, and that is quite unique. This means that we continue to invest in the production and distribution of renewable energy and fuels," continues Raf Flebus. "Driving on hydrogen offers a combination of unique advantages: fast refuelling, emission-free driving, no infrastructure adjustments at the user's site and a guaranteed electric range of 650 to 700 km, in all circumstances and at any time. All you need is a H2 filling station nearby. That has now been arranged for Leuven and the surrounding area", Flebus adds.

This H2 filling station helps achieve Leuven2030 objectives
Mayor Ridouani is pleased with this station on Leuven territory. DATS 24 believes it can play an important role. That's why it brought in other hydrogen pioneers Toyota, Hyundai and partner ALD Automotive for a workshop for all the companies at Research Park Haasrode on the benefits of H2. Ann Larosse, CSR & Innovation Manager at ALD Automotive Belgium, is committed to ensuring that there is room for hydrogen cars in every company fleet: "As a global leader in leasing and mobility, it is our responsibility to support new technologies that contribute to sustainable mobility. We have therefore developed a total contract that makes hydrogen cars accessible and affordable for interested companies. For them, this is a logical addition to their battery-electric cars".

H2 filling station Haasrode part of European H2 corridor
The hydrogen filling station was built with the support of the H2Benelux programme, coordinated by WaterstofNet and part of the Connecting Europe Facility programme (executed by CINEA), to significantly expand the existing public hydrogen fuelling infrastructure and hydrogen vehicle fleet in the Benelux. After Halle, Wilrijk and Haasrode, DATS 24 will open H2 stations in Erpe-Mere, Herve and Ollignies. 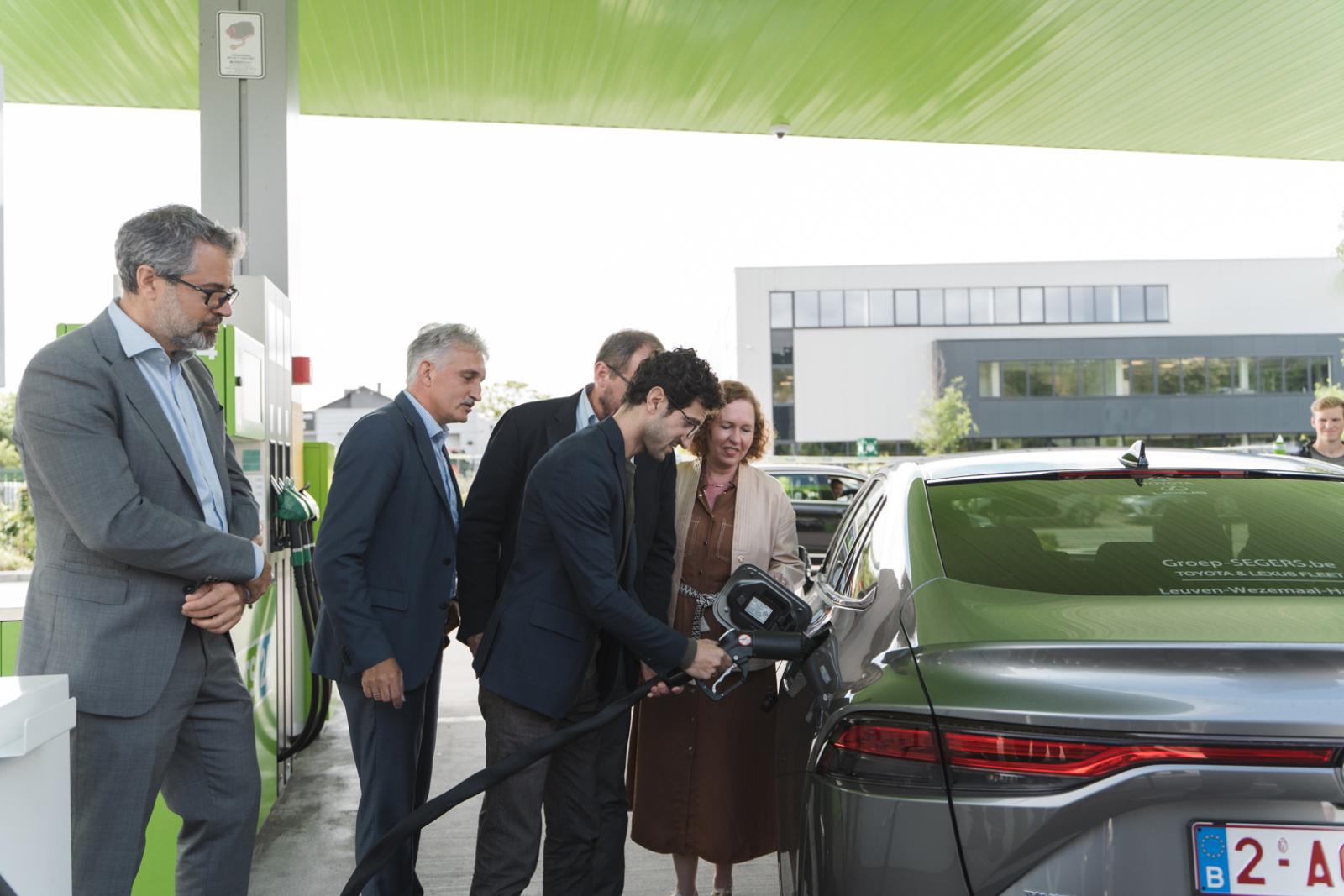